The focus and work of years was seemingly coming to its climax. The bold announcement at the beginning, the gathering of his co-workers, the teaching and the mighty works, and then the growing tension and hard confrontations—all of the lines were coming together to reach their single goal.

The work of Jesus was coming down to this, his last few days. What would his final act look like? What would he do? Would he meet the expectations of the crowds? Of his own closest followers? He had set his countenance and his feet straight for Jerusalem—so what did he have in mind?

Whatever the central meaning of his life and ministry, it would have to show itself right now. This was Jesus’s moment, if he was going to have one. And it was not a simple one. From his birth right through to his final entry to Jerusalem, Jesus has been evoking numerous strands of Israel’s long and pregnant story. There are rich layers of significance that precede this week. Will all those promises of meaning be kept?

For too many of us, these Holy Days have been reduced to one day—Good Friday—and to a single assigned meaning of that day.

“Jesus died for my sins.”

Now the death of Jesus on a Roman cross is certainly not less than this. But it is also so much more. There is a profound loss when we minimize the meaning of the crucifixion to my salvation, especially when I conceive of this saving merely as an escape to heaven when I die. In such a reduction we shortchange the gospel and shrink the impact and import of all that Jesus has accomplished.

How do we avoid this? As with so many things in the Christian life, a healthy recovery can be found when we return to the Scriptures. The fullness of Holy Week is found in the fullness of the Bible’s telling of the story. A renewed commitment to understanding the narrative as it unfolds in the Gospels will pay multiple dividends in appreciating the depth of the Passion drama.

The Gospels, like other books in the Bible’s library, should be read whole. Their telling of the end is embedded in the context of what they’ve been saying along the way. The Evangelists build their stories of Jesus intentionally, so each Gospel gives us a unique angle on the life and meaning of Jesus. We could appropriately pick any of the four Gospels to help us in this restoration, for they each lead us up to this momentous last week in their own way.

But as an example, we’ll take Mark’s story of Jesus, since he is the most intentional about tracking each of the days. So I invite you to read Mark’s whole telling of the week’s story. Without trying to impossibly unpack everything here in this short space, we will instead simply raise questions that point us to deeper significance:

Light breaks on the first day of the last week. Jesus has spent his entire ministry focusing on the kingdom of God. It is the theme par excellence of all his previous efforts. Now Jesus clearly calls up echoes from Israel’s royal history (from Saul to Solomon to Judas Maccabeus) to boldly embody the coming of the King himself into David’s city. Jesus’ prophetic announcement of God’s return here transforms into an explicitly messianic claim. So the stage for the week is set: Jesus is Israel’s king. But what kind of king is he?

Jesus has entered the city, but now his focus turns exclusively to the Temple. Why is the Temple at the center of Mark’s story here? Why does Jesus curse the fig tree? What is he looking for? Why does he immediately enact a parable of the Temple’s destruction? What is the point of his quote from the prophet Jeremiah?

Mark now spends more space describing the events of Tuesday than any other day of this week. What’s happening? Jesus is clearly and strongly confronting those who govern the affairs of the Temple and make up Israel’s supreme ruling body. The rulers, for their part, directly challenge Jesus’ authority. The clash that’s been long brewing in the ministry of Jesus is now coming to a head. Then the parables and provocations of the day culminate in a troubling prediction of the physical dismantling of the Temple within a generation. (It’s important to pay attention to literary form here, recognizing prophetic metaphors and apocalyptic language.) Israel’s story has reached a major turning point, and it is centered on Jesus.

There are two contrasting responses to Jesus here, an act of adoration surrounded by two references to betrayal. Jesus forces choices even as he is preparing for his own death.

So Jesus has chosen Passover, Israel’s great liberation event, as the backdrop to provide the meaning of his next action. Jesus claims to be bringing an Exodus, a new freedom movement. What were the elements of the first Passover and the original Exodus? Are all those elements to be found here as well?

Jesus has now fully entered into the trial—the time of great tribulation and testing that the Jews knew would precede their full redemption. He is convicted twice, by both Jewish and Roman tribunals. Of what specifically? What do the differing charges tell us about Jesus and his work? So Jesus is condemned to death, precisely as the King of the Jews. What have the week’s events, all of them carefully chosen by Jesus himself, told us about what Jesus thought his death meant? Is his death more than a sacrifice? How can it possibly be a victory?

As Jesus journeyed through the week, he was surrounded by symbols and echoes of Israel’s story. His recapitulation of them was not a mere repetition, but rather filled them with new and surprising meaning. Now, on the seventh day, he rests in death. What has been accomplished?

As Jesus journeyed through the week, he was surrounded by symbols and echoes of Israel's story. His recapitulation of them was not a mere repetition, but rather filled them with new and surprising meaning.Click To Tweet

If Israel’s story was always all about the world’s story, what does the resurrection of Israel’s Messiah mean for the rest of us? What does an echo of the creation story imply?

We have seen the birth of a new kind of king and a new kind of Temple. And I hope we are waking up to the possibilities of a new kind of kingdom and the renewal of worship. The powers who ran Israel’s first-century world—both Jewish and Roman—knew and followed only one model for ruling. Jesus came into the city having staked his life and his chance at victory on a completely different vision, one centered on the power of self-giving love.

Yes, Jesus died for me.

But my place is found only in a much bigger and better story than my own small tale. You, me, and all of us are called to take up our place in God’s transforming work. And the only place we learn the ins and outs of God’s holy work is in God’s holy book.

The way to avoid shrinking reductions of biblical truth is nothing other than a rediscovery of the fullness of the Bible own tellings. Read big. Read in context. Make connections. 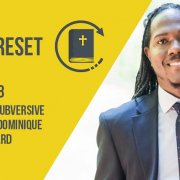 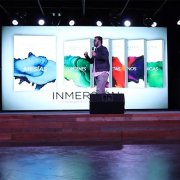 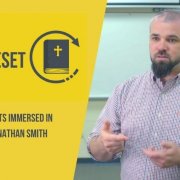 Episode 3: Nathan Smith – Getting Students Immersed in the Bible 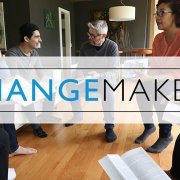 Why We Created ChangeMakers