They were counter-cultural—standing out in a world where reading and writing were rare. They were fully committed—doing everything necessary to ensure their communities were deeply formed by written texts. They were transformed—this solid, ongoing determination to live within these texts produced real change in their beliefs and in the character of their lives. The earliest Christians were truly people of the book.

And all of this happened in spite of the fact that in their world the Bible itself was still being written, and was not yet fully formed as a collection of sacred writings. Before the Bible was even completed, there was an impressive and widespread belief that knowing this content was basic to this new Jesus movement.

The new believers were committed from the start to immersing all of their communities deeply in the sacred stories and texts of their faith. Some of these texts were already very old, having been preserved by the ancient people of God. Some were brand new letters to fledgling churches or early collections of the oral traditions about Jesus. Regardless, the first followers of Jesus devoted themselves to learning all of it.

What makes this story remarkable is how unique this devotion was in the world of the Roman Empire. The religions of this period were centered especially on the offering of sacrifices to the gods and the accompanying profession of loyalty. Learning the content of a set of stories and instruction was not part of the arrangement.

The earliest Christian converts came into the faith from hearing the public preaching or private sharing of the announcement of the saving work of Messiah Jesus. But once they were in, they were immediately expected to incorporate themselves into an older story of what God had been doing in the world. No doubt, the experiences and practices of the synagogue were decisively influential on the first gathering of Jesus followers. The regular rhythm of public Scripture reading and discussion moved seamlessly into the first churches.

The regular rhythm of public Scripture reading and discussion moved seamlessly into the first churches.Click To Tweet

But when we consider that these churches were increasingly made up of Gentiles joining what was at first a Jewish movement, we can begin to recognize how striking the commitment to God’s written revelation really was. Early Christian leaders had to make heroic efforts to even produce and pass on these texts. There was no personal or financial gain in it for them, and they weren’t part of the leisure class with a household full of slaves to write, copy, and deliver their new writings.

First, writing materials themselves were rare and expensive. Writing and copying was slow, time-consuming work. In a world with no postal or delivery services, travel was both dangerous and costly. Yet the Christians were determined to produce a prodigious amount of new religious material and to make sure other far-flung Christian communities received copies of it.

As one example, we can look at the use of letters in ancient Rome, which were common enough, yet almost always very short. In contrast, the early Christian letters were lengthy, seeking to provide whole congregations with a significant amount of instruction and teaching. Ordinary papyrus letters averaged about 87 words (we have about 14,000 examples preserved). Even the more literary letters of someone like Cicero ranged only from 22 to 2,530 words. In comparison, Paul’s shortest preserved letter, Philemon, is 395 words in Greek and his longer ones are off the charts (Romans is over 7,000 words, 1 Corinthians is over 6,800, and 2 Corinthians over 4,000). This would have been unheard of in the ancient world. In short, this is serious content, and the believers were expected to be serious learners. 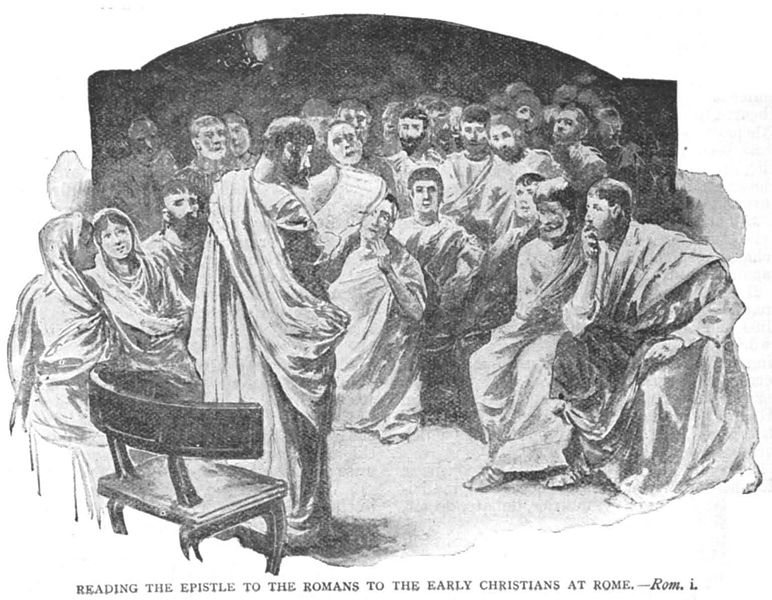 What would happen when a particular local gathering of Christians would receive a new apostolic letter, or even their first copy of one of ancient Israel’s sacred writings? The vast majority of the members of this community would have been illiterate, reflecting this characteristic of the larger Roman world. Yet all the evidence we have suggests that Christian worship gatherings always included a time for the public reading of, and interaction with, these Scripture texts.

All it took was at least one member who could read the text out loud. Reading the Scriptures became the ongoing rhythm of these times of worship and praise, learning and instruction. It is noteworthy, for example, how Paul and the other apostles showed no hesitation in quoting or referencing significantly from Israel’s Bible. Again, these congregations were largely made up of former pagans. These texts would have been completely foreign to most of them. Yet early Christian leaders expected everyone to enter into these stories of Israel as their own, to learn them inside and out.

They were people of the book, learners of the text, keepers of the traditions. And it made all the difference.

So what about us, today? What would it look like if we also became counter-cultural, committed, and willing to be transformed by these God-breathed books? What if we demonstrated this level of devotion? Maybe we too could change the world.

*The full telling of this story can be found in “A ‘Bookish’ Religion,” in Destroyer of the gods: Early Christian Distinctiveness in the Roman World, by Larry W. Hurtado, 2016, pp. 105-141.